Raiders Official Sponsor
Raider Senior Wrestler James Love and Junior Swimmer Morgan McCafferty both delivered clutch performances this past Saturday.
James won 4 straight matches at the District Wrestling Tournament to qualify for the State Tournament in the 182 lb. weight class. In doing so, he became the first Raider Wrestler to qualify for the State Tournament since 2010. James will compete in that event later this week at Ohio State.
Meanwhile, Morgan  competed at the State Swimming Championships for the third consecutive year and placed in two events, taking 6th in the 100M Backstroke and 7th in the 200IM. It was her third straight year qualifying in the Backstroke and her first time competing in both events – a tremendous accomplishment. Whats even more impressive is that as only a Junior, Morgan still has one more year to come back and compete as a Raider!
Both student-athletes represented RHS in fine fashion over the weekend and should be
congratulated for their efforts.  Great job Morgan and James!! 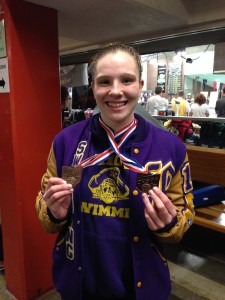