REYNOLDSBURG — Coming off a 55-40 win over Thomas Worthington in their postseason opener, the Raiders found themselves matched up against crosstown foe Watkins Memorial with a trip to the district semifinals at stake. Although both schools were separated by 27 spots in the Central Ohio District Tournament seeding, they are only separated by seven miles in distance, which meant a packed gym on both sides of the court on the night of Friday March 2nd. Both teams would trade big runs and momentum in their second-round playoff contest, and with the Raiders only leading by one possession late, Reynoldsburg called timeout in search of a big play to spoil a furious rally and huge upset by the visiting Warriors.

The Raiders (17-7) led by as many as 15 points late in the 3rd quarter, but the Warriors would go on a 25-13 run to cut Reynoldsburg’s lead all the way down to three with 51.4 seconds to go in regulation. Reynoldsburg would call timeout after almost turning the ball over on the ensuing possession, but Goliday would go coast-to-coast for a transition layup out of the huddle to begin a game-ending 6-0 run for the Raiders that led to a 63-54 second-round playoff win over Watkins Memorial.

“It’s a different feeling when you do it with your lifelong friends,” Goliday said after the game of his group’s return to the district semifinals. “And obviously we are hungry because we were here before last year, but we definitely want to do it in a better way.”

Reynoldsburg’s season ended last year in the district semifinals with a 45-41 loss to St. Charles, and they have been hungrier than ever this season as a result. Including Friday Night’s win over Watkins Memorial, the Raiders have been on a roll in 2018. They have now won six games in a row and 9 of their last 11 games going back to the regular season; their only two losses in this stretch were against teams who also advanced to the district semifinals on Friday night (Westerville North and Pickerington Central).

Friday night’s victory was certainly a fight until the very end, though.

Watkins Memorial would open the scoring with a three-pointer just over a minute and a half into the game, but junior guard Ben Fort answered back at the other end to tie the game and get the Raiders on the board with 6:05 left in the first quarter. Both teams would alternate buckets from there, and with the Warriors leading by two halfway into the opening quarter, senior forward Tre Williams would tie the game from down low to begin a stretch of 10 unanswered points in just under two minutes for Reynoldsburg to give the Raiders a 15-7 lead with 1:54 left in the 1st quarter. The Warriors would respond with four points in the final 35 seconds of the period, scoring from downtown as time expired in the opening quarter to cut the Raiders’ lead to 15-11.

The Warriors would capitalize on second-chance points to open the 2nd quarter and trim Reynoldsburg’s lead to 19-17 just two minutes into the period. With Watkins Memorial in control, Williams would draw a foul and split a pair of free throws and would get another basket waved off after committing an offensive foul of his own. On the Warriors’ next possession, Reynoldsburg would get a steal at half court and sophomore guard Shon Strickland ran it uncontested for a layup, and Williams would quickly score twice in a row to force a timeout with 2:52 left in the half and the Raiders up 26-19. Both teams would go on a scoring drought to end the half, with the only scoring coming at the charity stripe for Watkins Memorial as the Raiders went into the locker room with a 26-21 lead.

Both teams would trade baskets to open the 3rd quarter, but the Raiders would still lead 30-27 with 5:34 left in the period. Reynoldsburg would then turn up its defense and transition offense, forcing two steals to swing the momentum in its favor as part of a 14-2 scoring run to take a 44-29 lead just over halfway into the 3rd quarter. Williams would score eight of these points as part of his 17-point performance to lead the Raiders on Friday night.

But Watkins Memorial would not go away.

The Warriors would score four quick points in a row in transition along with another layup after a three-pointer by Goliday, and they would hit two shots from downtown not even 30 seconds apart from each other to cut the Raiders’ lead to 47-42 with 1:05 to go in the 3rd quarter and stun the Reynoldsburg home crowd. Fort would score in the post late in the period to extend the lead to 49-42 going into the final period of regulation.

No one would score in the 4th quarter until senior forward Cole Crosby split a pair of free throws with 6:35 to go. Both teams would alternate baskets from there, and the Raiders would lead 56-49 with 3:53 to go. Reynoldsburg would kill about two minutes off of the clock, and Elijah Thurston would eventually draw a foul to give the Raiders a 57-49 lead with 1:57 left in regulation after splitting a pair of free throws.

The outcome was still far from decided in the Burg, though.

Watkins Memorial would nail a three pointer and the Raiders would miss a pair of free throws with under a minute left, but the Warriors would hit a pair of free throws after forcing a foul on Thurston to get within 57-54 of the Raiders with 51.4 seconds to go. Reynoldsburg would call timeout after almost turning the ball over just before half court, and Goliday would score on a coast-to-coast layup just 15 seconds later to extend the Raiders’ lead to two possessions to silence the large Warriors crowd.

“That was big,” Williams said of Goliday’s shot after the game. “It gave us some good momentum and I felt like it brought [Watkins Memorial] down a little because they were kind of hyped up. It just settled the crowd.”

The Warriors would come up empty the rest of the way, missing in the post and from downtown on their final two possessions, while sophomore guard Nick Wallace and Goliday would each hit a pair of free throws to close out the Raiders’ 63-54 victory and put them one step closer to a district title. Even more, the Raiders seniors definitely put on a show in what was their final home game, as the playoffs will shift to neutral sites from the district semifinals onward.

But getting a victory in that setting against a crosstown rival was definitely as sweet as it could get.

“It is a surreal moment,” Goliday would go on to say of his final Raiders home game. “It reminds me that time is flying, but I wouldn’t want it ended in any other way.”

Now the Raiders can say they finally have their chance at redemption in the district semifinals. They will play Westerville Central on Wednesday at a neutral site to be determined, as the Warhawks advanced by defeating Whitehall-Yearling 68-61 one day earlier. Reynoldsburg wants to get right back to work to try to secure a trip to the district finals at Ohio Dominican University next weekend, and is eager do whatever it takes to get that district title.

“We worked hard to get here, and honestly I think we deserve it,” Goliday would go on to say. “We hope to take this momentum that we have all the way through practice, and we’re going to handle some business on Wednesday.” 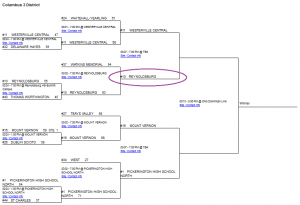 #10 Reynoldsburg (17-7) will next play against #11 Westerville Central in the District 3 Semifinals on Wednesday March 7th at a location to be determined. The winner will advance to the district finals.
‘
Round 1: W 55-40 (vs. #40 Thomas Worthington)
Round 2: W 63-54 (vs. #37 Watkins Memorial)
Round 3 (District Semifinals): Tip against the Warhawks is Wednesday March 7th at 7:00pm (location TBD).
Round 4 (District Finals): Winner of above vs. Winner of #1 Pickerington North vs. #16 Mount Vernon, Saturday March 10th at 5:00pm at Ohio Dominican University.
‘
Follow @ReynoldsburgBB on Twitter for play-by-play updates during game days and all things pertaining to Reynoldsburg Raiders Boys Basketball.
Raiders Official Sponsor