WORTHINGTON – One year ago, the Raiders’ season ended with a 45-41 loss to St. Charles in Worthington Christian Middle School’s gym in the district semifinals. A year later on the night of Tuesday March 7th, the 10th-seeded Raiders found themselves in the same neutral gym with a chance at redemption in the 2017-18 district semifinals against the 11th-seeded Warhawks of Westerville Central. With the Raiders up by six midway through the third quarter and the Warhawks scoreless in the second half up to that point, Westerville Central made a quick run to tie the game with 2:06 to go in the period and the Raiders desperately needed a quick answer.

But with everything on the line, the Raiders caught fire and punched their ticket to Ohio Dominican University.

With the game tied 34-34 late in the 3rd quarter, senior guard Jamiel Goliday hit one of his four three-pointers to begin a 17-0 run for the Raiders (18-7). He would add 7 more points in the 4th quarter, when senior forward Tre Williams would score 9 of his 17 points, and Reynoldsburg exploded for 29 points and shut down Westerville Central (17-8) in the final period to pull away for a 69-48 district semifinals victory.

Junior guard Ben Fort led the Raiders with 22 points in a dominating performance, scoring exactly 11 points in both halves on eight field goals.

“We just played together, played good defense, and stopped their best player from scoring,” Fort said after the victory and of what was a game-ending 35-14 Reynoldsburg scoring run. “[The district finals] sound great and I’ve never been there before, so it should be fun.”

In fact, nobody on this Raiders squad had made an appearance in the district finals before. Not even Raiders head coach Scott Davis. With the win over Westerville Central, the 10th-seeded Raiders will advance to play 16th-seeded Mount Vernon in what will be Reynoldsburg’s first district finals appearance since 2012: the year before Davis came to Reynoldsburg.

“It’s not about me; I’m just happy for our kids,” Davis said after the game. “Honestly, I was glad we were coming back [to Worthington Christian Middle School] not for sweet redemption or anything like that. Our guys had been in this gym before, so it was not a strange environment. They asked us if we wanted to be in the same locker room, and I said ‘absolutely’ and that we were going to take this thing head on. And our kids responded.”

They would turn the ball over 10 seconds into the game, which led to a quick Warhawks three to open the scoring, but the Raiders would settle in and respond from there. Williams would draw a foul, split a pair of free throws, and then score again to tie the game at 3-3 just under two minutes into the opening quarter. Reynoldsburg and Westerville Central would constantly trade punches the rest of the period, where no team led by more than two points. Fort would score 7 of his team-high 22 points in the latter portion of the period, scoring on two short jumpers and a late three-pointer, but Westerville Central would score the final basket 16-14 lead over Reynoldsburg despite missing two free throws to close out the quarter.

Each team would come up empty on their first two possessions of the 2nd quarter, but Goliday would hit two of his four shots from behind the arc in a 39-second span, and Fort would hit a pair of free throws as part of an 8-0 Reynoldsburg run to start the period and extend the Raiders’ lead to 22-16 with 4:43 left in the half. Although the Warhawks were held scoreless in the period up to this point, they would roar back and tie the game just under two minutes later. From there, senior Malcolm Murphy spun past a Warhawks defender underneath the hoop and passed the ball to Williams who would score in the post. Westerville Central would hit a late three-pointer, Fort would hit a layup, and both teams could not capitalize on their final possessions of the half as the Raiders took a 26-25 into the locker room.

“The previous games, I’ve been hitting them,” Goliday said of his performance from downtown in particular. “I’ve just been trying to do my best, stay humble, and just shoot it.”

Goliday has caught fire in February and March at the perfect time for Reynoldsburg, scoring a combined 42 points and ten three-pointers in the Raiders’ last two regular season games against Lancaster and Division II district finalist Bishop Hartley, and most recently coming a 15-point performance in the Raiders’ 57-52 second round playoff victory five nights prior against Watkins Memorial.

He would continue his hot streak on Wednesday night, along with the rest of his teammates.

Coming out of the locker room against the Warhawks, the Raiders would strike first with 6:46 left in the 3rd quarter, as senior guard Elijah Thurston scored on an open layup to extend Reynoldsburg’s lead to three. Westerville Central would then turn the ball over in a sequence that would lead to an electrifying dunk by Fort that pleased the Raider faithful. They would come up empty on their next two possession as well, while Goliday would split a pair of free throws to extend the Raiders’ lead to six with 5:17 left in the period. The Warhawks would not score in the 3rd quarter until a stunning sequence where they would secure four offensive rebounds before eventually securing a putback basket, but Fort would quickly respond 30 seconds later with a long two-pointer to put the Raiders up 33-27 just over halfway into the 3rd quarter.

But just like in the previous half, the Warhawks would respond.

The Raiders were held to only one free throw in the next two and a half minutes, missing from downtown and turning the ball over once. Westerville Central would score two buckets in transition and hit a three-pointer with 2:06 to go in the 3rd quarter to tie the game at 34-34.

Then, in a momentum and potentially season-changing sequence, the Raiders would take over.

With about a minute left in the 3rd quarter, the Warhawks tried to grab a loose ball and bounce it out of bounds off of a Raiders defender, but the defense would tighten up and force an errant throw off of a Westerville Central player. Reynoldsburg would keep the ball and Goliday would immediately score a three after that, while Thurston and Fort would sink three combined free throws to give the Raiders a 40-34 lead over the Warhawks going into the final quarter.

The Raiders defense would continue to shut down Westerville Central in the 4th quarter, while the Raiders offense exploded in response. Williams would score on an offensive board, Thurston would comfortably sink a pair of free throws, and senior forward Cole Crosby would bounce a no-look pass to Williams who would dunk to extend the Raiders’ lead to 11 with 5:57 to go. After a offensive foul by the Warhawks, Goliday and Fort would each connect from downtown on consecutive possessions to make it 17 unanswered Raiders points and extend the lead to 51-34 over Westerville Central with 4:39 to go. The Warhawks would finally break their scoring drought extending back to the previous quarter with a free throw and a bucket off of a Raiders turnover with 4:00 to play.

This time, the Raiders wouldn’t let the Warhawks roar back.

Williams would dunk again on the next Raiders possession, and Goliday and Thurston would combine for three free throws on the next possessions. Williams would put back a missed free throw by Thurston and get fouled as part of a three-point play, and Goliday would score on a long pass after a Warhawks basket as part of what would be a 29-6 scoring run to give the Raiders a 63-41 lead with 2:40 to play before timeout was called.

This would cap off a Williams’ 17-point performance and 9-point 4th quarter in particular.

“My teammates were just looking for me and I just looked for them too to get open shots,” Williams said after the game of the big scoring run and his performance overall. “We just knew we had to get stops and we were going to wear [Westerville Central] down. We knew we were going to get our stretch and we just pulled away.”

From there, a trip to the district finals for Reynoldsburg was in sight.

Fort would cap off his 22-point performance with a late putback with 1:41 to go. Sahmi Willoughby and James Dean would each also score off the bench in the final minute of regulation to end the game on a high note, and the Raiders secured their trip to the district finals by a final score of 69-48.

But getting this win in same round and on the same court where they were eliminated last season made this victory even sweeter, especially for Goliday and his five fellow senior teammates.

“We wanted to come out with the mentality that we were not going to lose, and I think all of us were on the same page,” Goliday would say of the big game-ending run. “When we’re on the same page, we’re dangerous. It’s our senior year, and the fact that we made the district finals makes it even more great. It’s surreal and it means a lot.”

As winners of seven games in a row and 10 of their last 12 dating back to the regular season, the Raiders are indeed as dangerous as ever and have emerged as legitimate contenders in Central Ohio. Most importantly, the Raiders will continue their magical road to redemption on the court of Ohio Dominican University this Saturday, as Reynoldsburg is now one win away from a district championship. 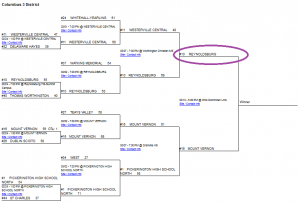 #10 Reynoldsburg (18-7) will next play against #16 Mount Vernon in the District 3 Finals at 5:00pm on Saturday March 10th at Ohio Dominican University. The Yellow Jackets stunned top-seeded Pickerington North in the district semifinals with a 61-58 win around the same time the Raiders’ game went final, leading by 13 after three quarters and holding off a late Panthers charge to secure the huge upset.
‘
Round 1: W 55-40 (vs. #40 Thomas Worthington)
Round 2: W 63-54 (vs. #37 Watkins Memorial)
Round 3 (District Semifinals): W 69-48 (vs. #11 Westerville Central)
Round 4 (District Finals): Tip against the Yellow Jackets is Saturday 5:00pm at Ohio Dominican University for the district championship.
Round 5 (Regional Semifinals): The winner of the Raiders vs. Yellow Jackets would advance to the regional semifinals at 7:00pm on Wednesday March 14th at Ohio Dominican University, and would play against the winner of the following District Finals game between #3 Hilliard Bradley and #8 Westerville South (8:30pm at Ohio Domincian University). The Raiders beat Westerville South 61-52 at home on Tuesday January 23rd.
‘
Other District Finals Games: On the other side of the Central Ohio Regional Bracket, #4 Westerville North will take on #9 Pickerington Central (10:00am, Ohio Dominican University), while #2 Upper Arlington will take on #6 Dublin Coffman (1:30pm, Ohio Dominican University). The Raiders played each of these teams except for Upper Arlington in the regular season, going 0-4 in games against them.
‘
Follow @ReynoldsburgBB on Twitter for play-by-play updates during game days and all things pertaining to Reynoldsburg Raiders Boys Basketball.
Raiders Official Sponsor