After a quiet outdoor State meet last Spring, the RHS boys track team is reving up for what could be an exciting 2019 campaign. These 6 boys were the OATCCC Indoor State Runners Up today.

The runner up trophy came down to the last race of the day, the 4×400 meter relay. Strong runs by Senior, Dionte Roddy, Junior, Doniven Jackson, and Junior, Adrian Logan left the Raiders in third place going into the final exchange. Senior, Lance Gauthney took the baton for the final 400 meters of the race. Lance charged ahead closing the gap every step of the way. In the final 50 meters, Lance sprinted past two teams and crossed the line winning the 4×400 meter relay and clinching the runner up position as a team. 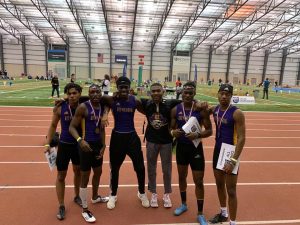